The 6th grade students had an opportunity to engage in a Junk Drawer Engineering activity through the 4-H School Enrichment. It is a Penn State Extension Program. The students engaged in engineering and technology processes by bringing together a scientific inquiry and engineering design approach to learning by exploration. 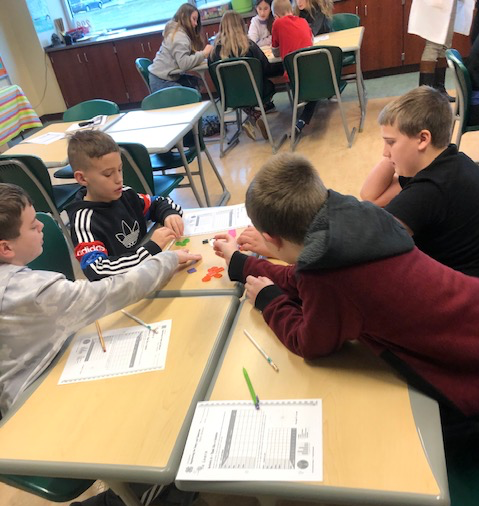 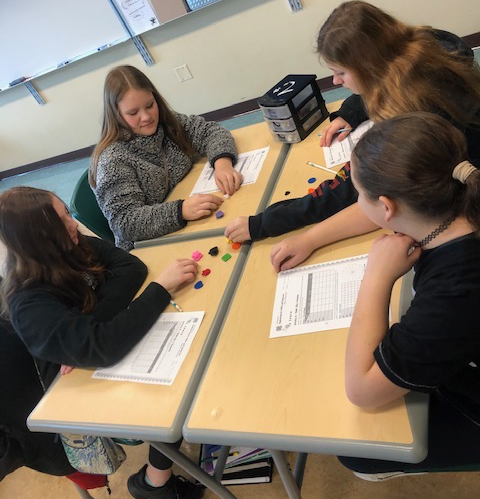 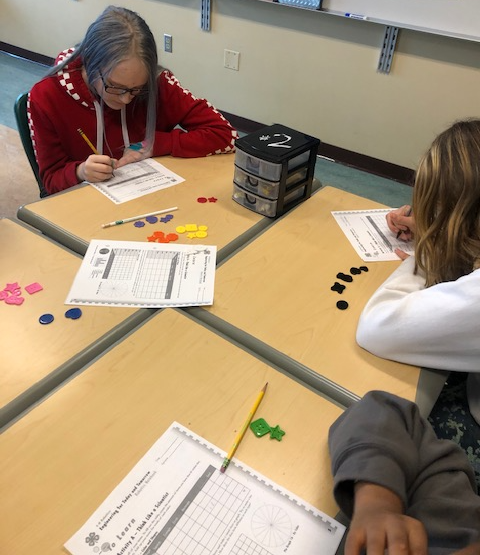 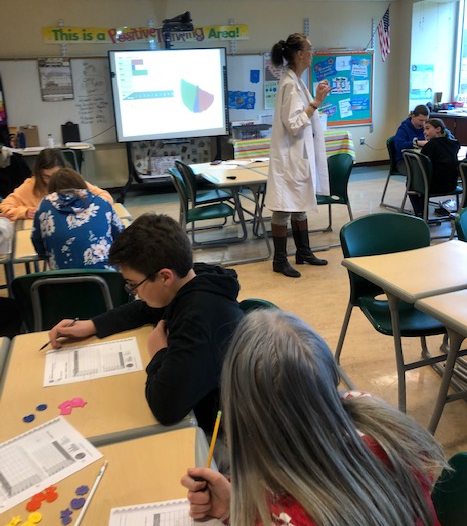 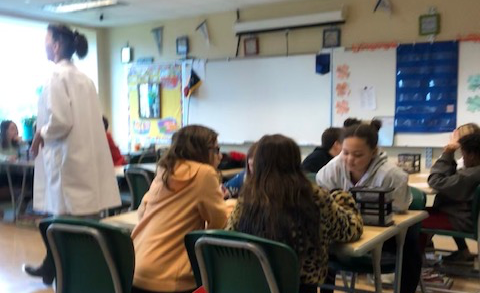 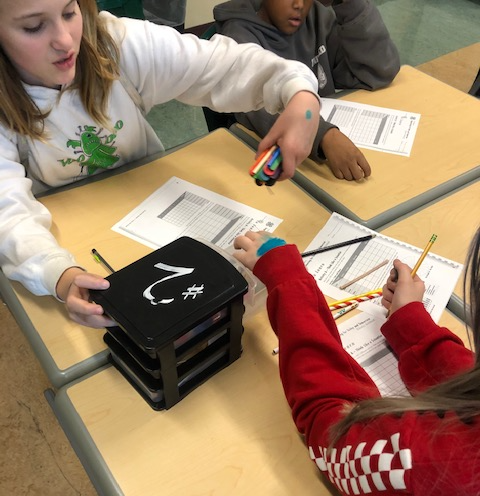 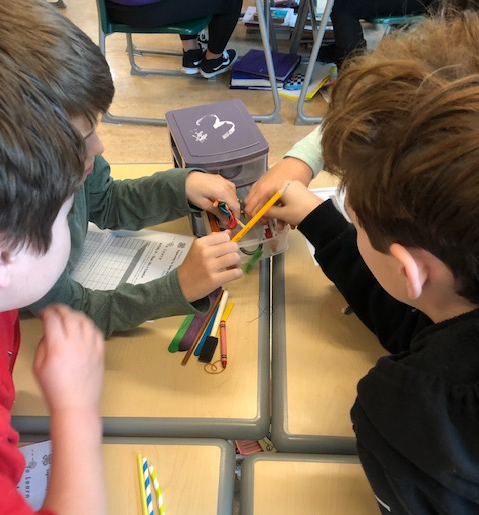 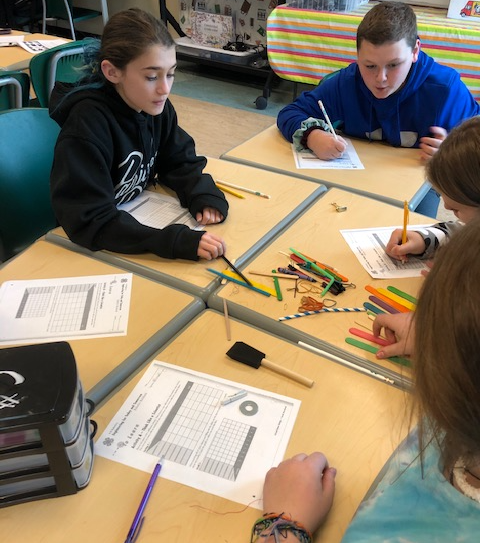 On January 10th, Carnegie Science Center held an assembly for grades 7 and 8 students. Several students volunteered to assist in a few demonstrations. 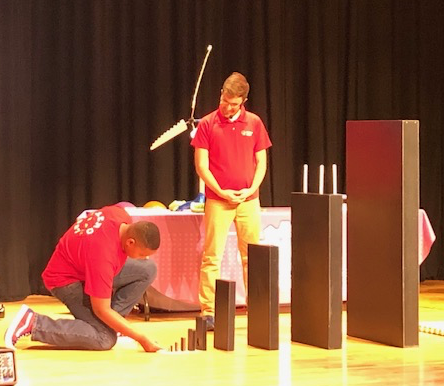 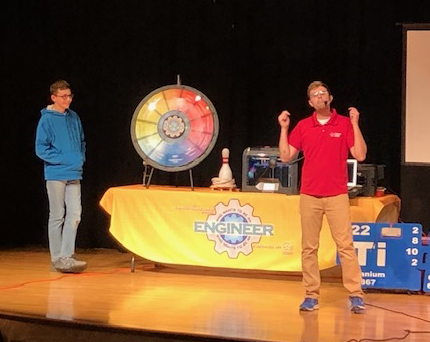 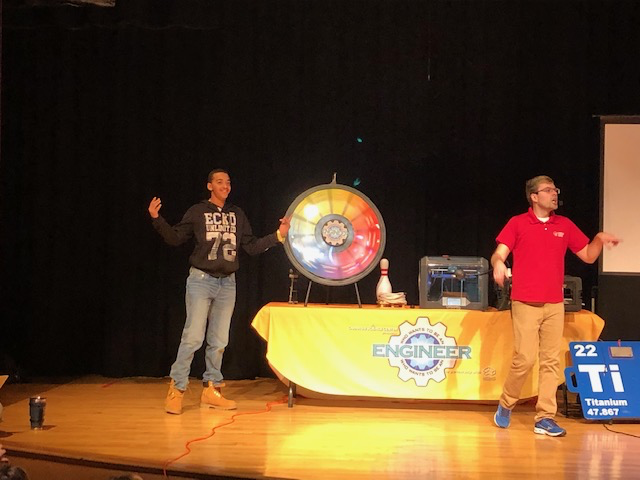 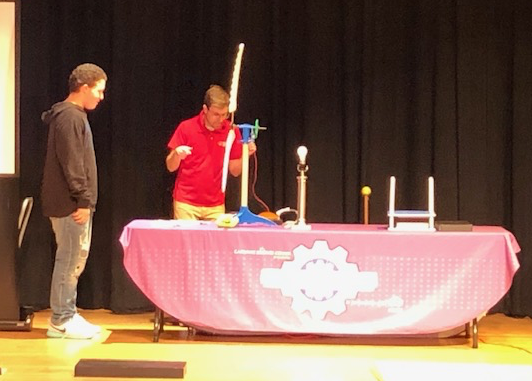 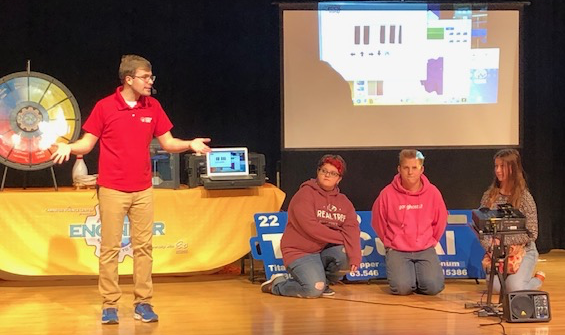 Congratulations to Claire, Brea, Mikayla, and Hayden for winning first place in the Best Portfolio section of the Mechanical Arm Challenge at Penn State Fayette.
Thank you to Mrs. Pazer and Ms. Hackney for sponsoring our team. 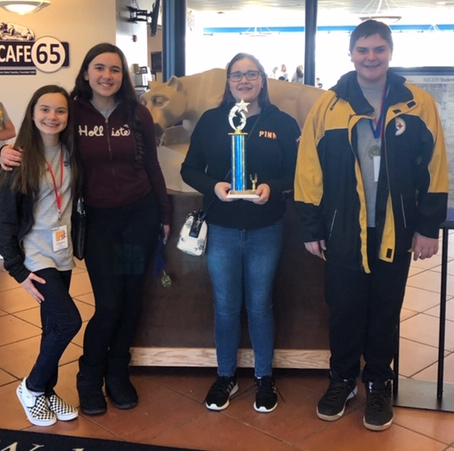 YIMS continues to participate in our Power Fluid Challenges through Penn State Fayette! 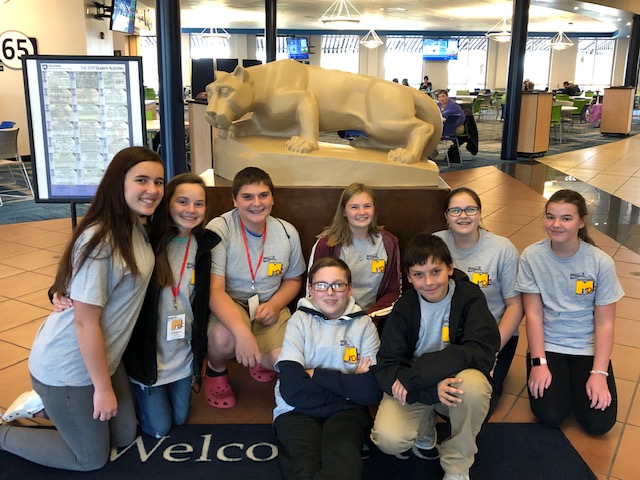 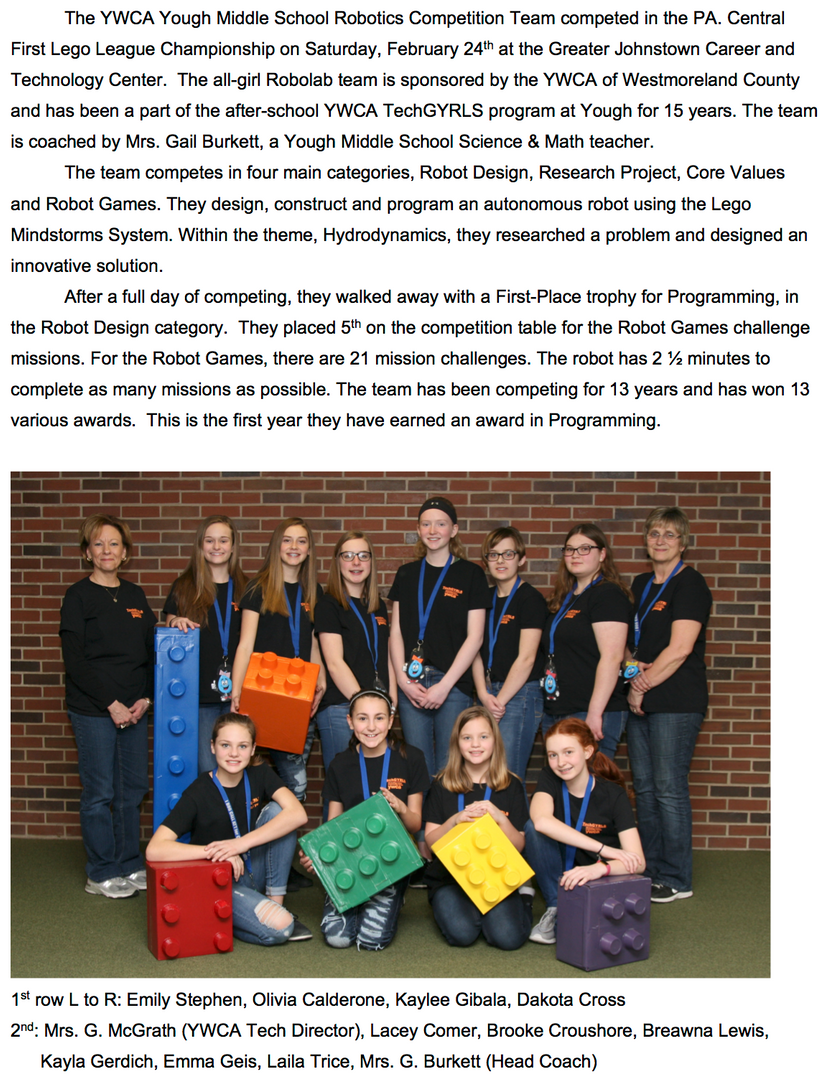 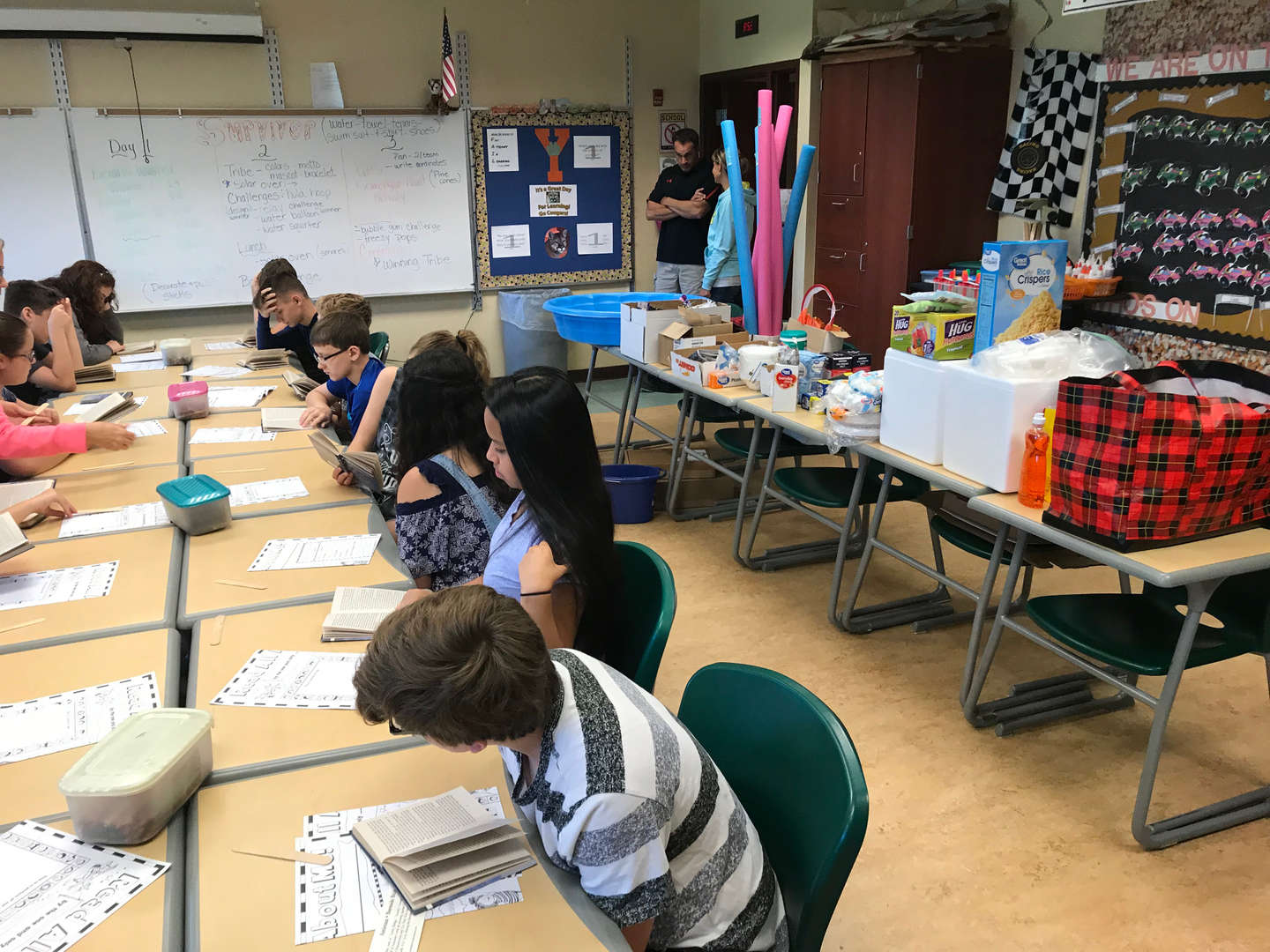 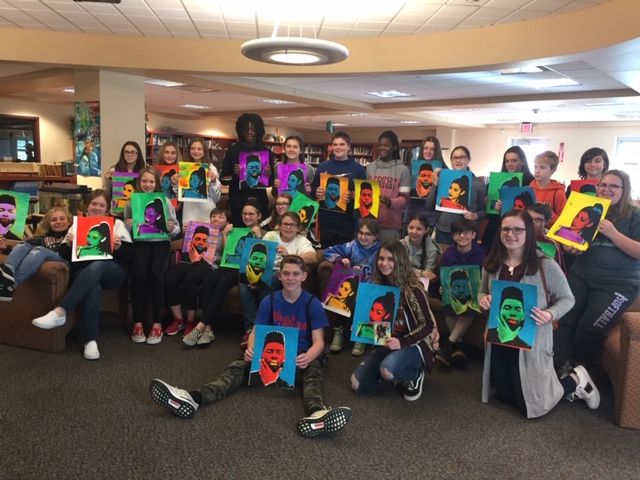 Mr. Cortazzo and Mrs. Donaldson provided every fifth grade student with support to complete an Hour Of Code! After a short computer science lesson students actually wrote their own computer code. Every fifth grade student, with the support of some experienced helpers, animated the letters of their name. After completing that task some even ventured to make a bat fly across their name or make it look like a squirrel was eating a taco! The students were extremely excited about this hour and look forward to their computer class next year in sixth grade with Mr. Cortazzo where they will get the opportunity to expand their understanding of coding and create more in-depth projects next year. 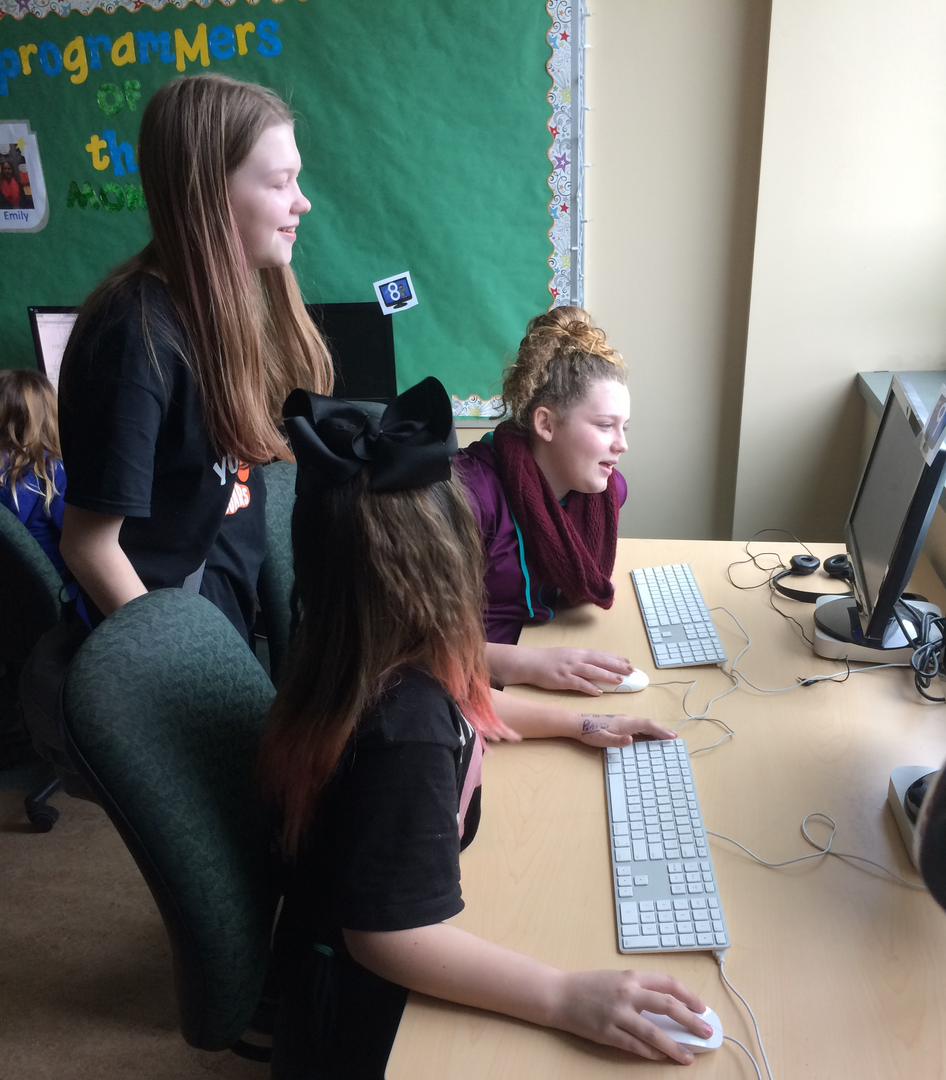 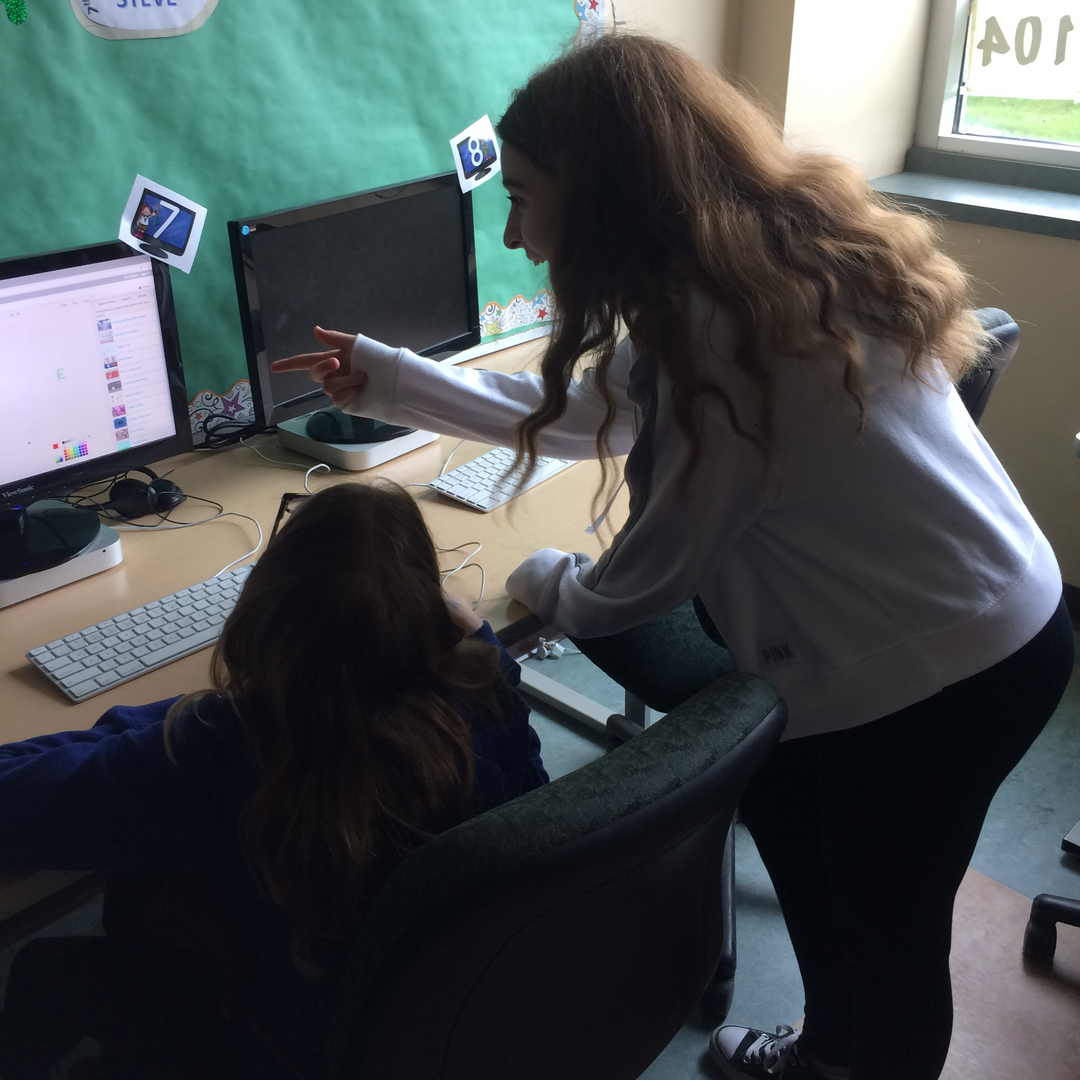 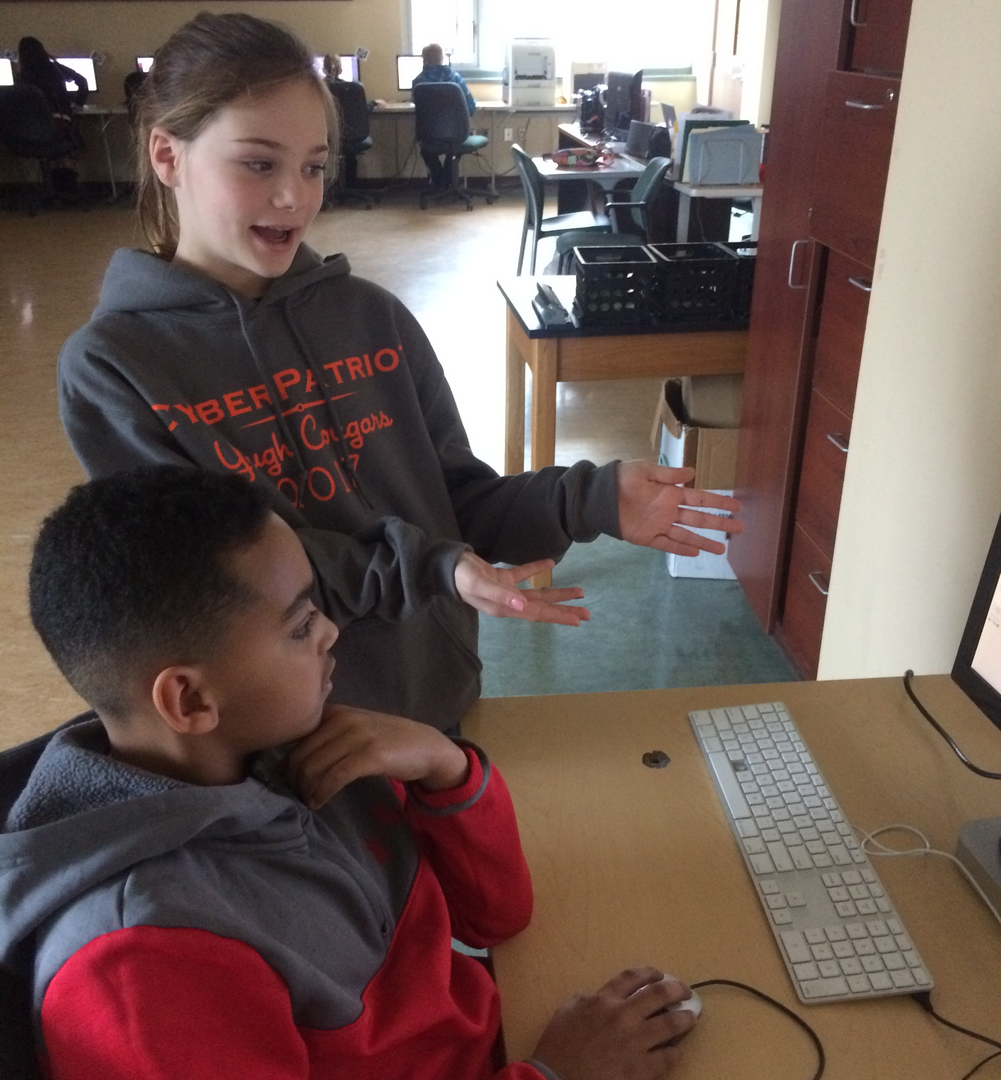 Coding for kindergartners. Genetics and DNA analysis for third-graders. Robotics and automation for fifth-graders.

These are just some of the hands-on learning opportunities that could be offered to students in three Westmoreland County school districts starting next school year, thanks to grants awarded by Chevron's Appalachia Partnership Initiative.

Yough Intermediate Middle School Principal Kevin Smetak said he believes these new programs will give students even more opportunities to learn about real-world applications of the skills they learn in the classroom, preparing them for jobs in these fields in the future.

Project Lead the Way specializes in developing curriculums designed to expose students to STEM — science, technology, engineering and math — fields through projects that simulate real-world problems and experiences. For example, students learning about robotics and automation might be asked to build a robot capable of transporting hazardous materials from a disaster site. Another curriculum teaches students about the human brain by asking them to design and create a video or podcast to educate their peers about concussions and sports injuries.

“It's more exploration and open-ended, where the children are involved more in design and learning as they're going through the models,” said Audrey Dell, principal of West Point Elementary School in the Hempfield Area School District. She added that exposing students to STEM skills at a young age will help them build the foundation they will need to be successful in middle and high school.

Hempfield received a total of $100,000 to use across its five elementary schools. Computer technology teachers will be trained over the summer and will select the curricula for next school year.

The Belle Vernon Area School District received $10,000 to be used in one of its elementary schools.

The funding came from Chevron's Appalachia Partnership Initiative, which focuses on STEM education and workforce development in the region. Project Lead the Way is one of many programs supported by the initiative since it was launched by Chevron in 2014.

Jamie Martines is a Tribune-Review staff writer. Reach her at 724-850-2867 or jmartines@tribweb.com.

Yough Intermediate Middle School recently had the opportunity to partner with the Carnegie Natural History Museum to bring a new program to YIMS. YIMS was the first Middle School to pilot this program to enahnce student learning in regards to dinosaurs!

See the article and video below!

WHAT ABOUT STEAM EDUCATION?

By now, most people with an interest in academics know that S.T.E.M. stands for Science, Technology, Engineering, and Mathematics and know what a STEM school is, but the newest buzzword going around in STEM education is STEAM, which is an acronym for the same thing, but with the Arts included.

For the past few years, the STEM program has been heavily promoted and widely accepted since mostly everyone can agree that the need for workers with high tech skills in America is in high demand. At YOUGH INTERMEDIATE MIDDLE SCHOOL, we are preparing our students to meet this demand and have adopted a highly rigorous STEAM focus within our building. Why a
STEAM education?

As one can see, a STEAM driven curriculum and education allows for the creation of a wellrounded, highly educated student. The YOUGH INTERMEDIATE MIDDLE SCHOOL is committed to providing this education for our students. Whether it be curricular driven, through the use of the Makerspace Lab, or bringing in STEAM related guest speakers for our students, we are cutting  edge in terms of STEAM. Please continue to follow us as we provide many examples of how we are STEAMing ahead!

Why the A Matters in STEAM Education

Science, technology, engineering, and math (STEM) subjects are the focal point of popular integrated learning systems. However, voices are calling out for the “A” in “arts” to turn STEM into STEAM. What does the debate involve, and what do educators and students think about it?

The National Math + Science Initiative points out some numbers that highlight STEM’s essential role in the United States’ education system. Their data shows that:

These and other statistics paved the way for today’s heavy emphasis on STEM subjects in the education system.

Another factor that contributes to the ongoing efforts to promote science and math is that students who may initially take an interest in such courses often change their minds because of external pressures and stereotypes. An article in Forbes says, “This past fall, Stanford University welcomed 474 women to their undergraduate engineering program, about 30 percent of their overall engineering enrollment.  At Purdue University, 20 percent of undergraduate engineering degrees awarded go to women.”

The Forbes article cites the example of one woman who took a computer coding class in high school and was disappointed to find that she was the only girl in the class. When she went to a university, she chose international relations and French as her fields of study.

Does the “A” Really Have a Place?

Given the need for educators to focus on STEM in their integrated learning systems, is it really wise to say that the arts should also take a prominent place? Brian Dunning, a professional writer who focuses on scientific skepticism, says no to STEAM. He says, “The importance of art does not lie in any association with STEM.”

Dunning lists a few reasons for his naysaying. His reasons include:

The practical nature of STEM subjects is clear, but that does not mean that the arts play no role in leading students to successful careers. In July 2014 Edudemic showcased an info-graphic by the University of Florida that shows how important that it is to recognize that a “half-brain” education — that is, an education that heavily favors either left-brained or right-brained subjects — is not good enough.

The infographic gives examples of prominent personalities who displayed strong characteristics from both sides of the brain. The examples include Steve Jobs, Albert Einstein, and Marissa Mayer. Steve Jobs, while brilliant when it came to technology, also saw things from a creative perspective. He envisioned products and  constructed a marketing strategy that appealed to people’s hopes, dreams, and experiences.

Yes, students who study arts tend to perform better academically than those who do not, but there are further reasons why the arts are an important part of an effective education. Arts help students build confidence, develop motor skills, and hone their decision-making and problemsolving skills.

The huge need for skilled workers in STEM professions is influencing the curriculums of schools, but what do teachers think about adding an arts emphasis into the  ix? One professor at the University of New Mexico, Anne Taylor, is a strong advocate of giving arts and architecture a place. Taylor, who manages a program at a local elementary school, says, “We are in the middle of a three-year agreement with the school… We will do an assessment to see if math learning and other subject areas are impacted positively through the program.”

The principal of the school where Taylor’s program is being used wants to help students find their passions, and a well-rounded program like Taylor’s may be the key to doing that.

A school district in Illinois has an ongoing STEM program, and the principal of a middle school in the district says that “More and more, STEM is being embedded into the (core) curriculum…STEM is connected to everything in our society and it’s good for kids to see that.” In keeping with that spirit, the school also has a STEAM program; the students love the 3D printer that helps them take their designs to the next level.

EdWeek.org reports that some educators feel that STEM is adequate without giving more attention to the arts. After all, STEM programs don’t dismiss art or devalue it. The arts play a natural role in STEM programs and help students tackle design and engineering challenges.

As teachers adjust to new core standards, students may struggle to adapt to new teaching methods. Do schools that already have a stable STEM program really need to integrate arts? Is it worth going through another adjustment period?

An article on redorbit.com reports that at a retreat attended by minority students, the students brainstormed ideas about what could make their STEM training more effective, and one of the suggestions centered on connecting STEM to arts and humanities.

The arts belong in schools, but do they have the right to change STEM to STEAM? Since art programs are already a part of the core curriculum in schools, is the debate really just a matter of words? Time will tell as educators continually adapt their approaches to give the greatest possible benefits to students.

Cyber Patriot at the Middle School

Cyber Patriot, is a program started at the Yough Intermediate Middle School this year. Started by the United States Air Force Association, Cyberpatriot is in search of students and teachers that might be interested in sharing their knowledge of computer skills in configuring Operating Systems, finding backdoor vulnerabilities in computer systems, securing firewalls, script writing and networking.

The students will need to be learning basic cybersecurity skills and the importance of online safety. At the center of CyberPatriot is the National Youth Cyber Defense Competition. The competition puts teams of high school and middle school students in the position of newly hired IT professionals tasked with managing the network of a small company. In the rounds of competition, teams are given a set
of virtual images that represent operating systems and are tasked with finding cybersecurity vulnerabilities within the images and hardening the system while maintaining critical services. Teams compete for the top placement within their state and region, and the top teams in the nation earn all-expenses paid trips to Baltimore, MD for the National Finals Competition where they can earn national recognition and scholarship money.

This program also gives us as teachers access to cutting edge software from Microsoft and Cisco. Cyberpatriot is led by teacher Mr. Floyd Kish along with assistance from Ms. Erin Lyons and Mr. John Cortazzo.

Yough students applied for and tried out for a spot on this team. Team members should exhibit the following qualities; self-starter, ambitious, analytical and most importantly a team player with a positive attitude. The following students have been chosen as team members: 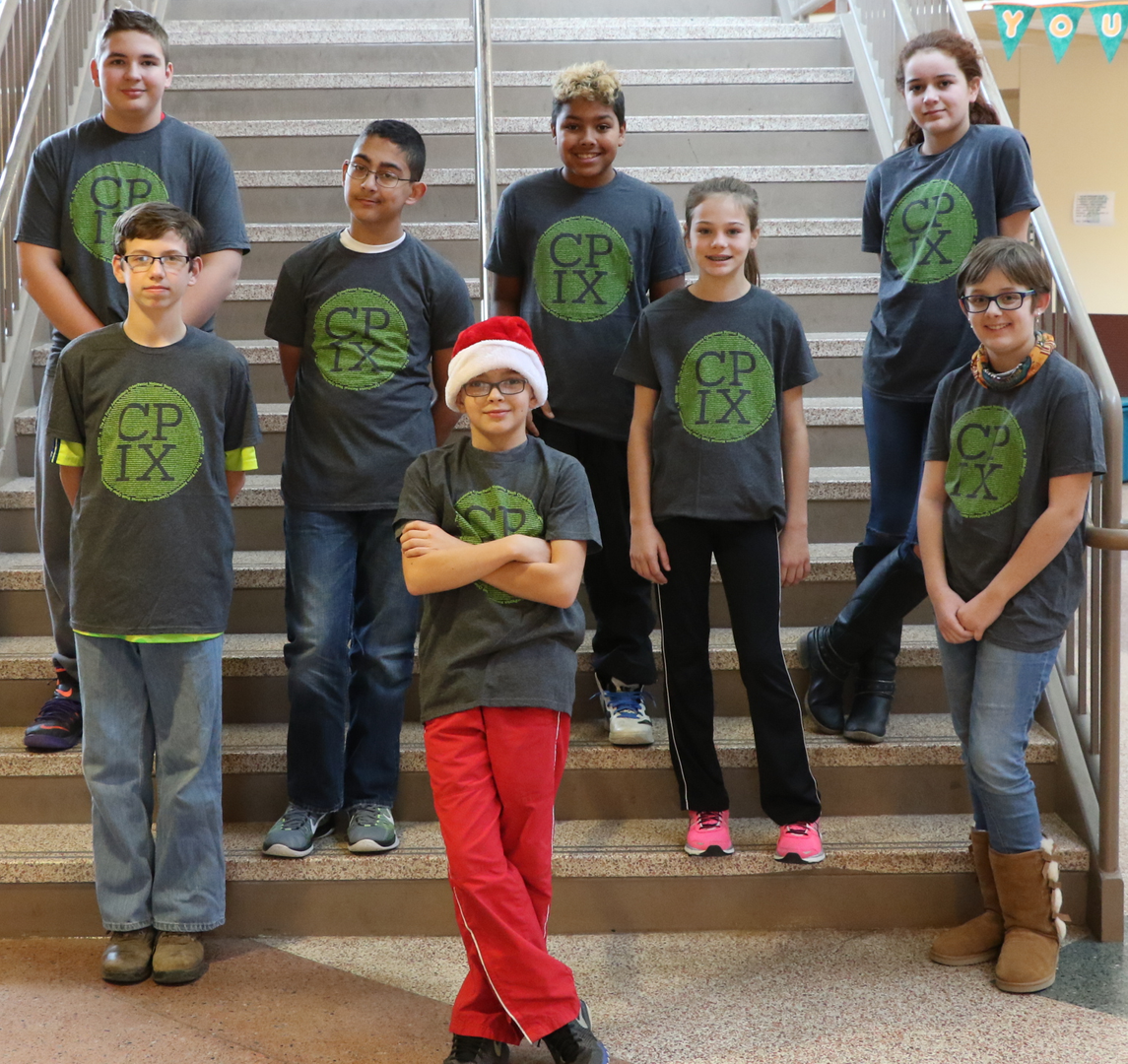 Here is a link to see our amazing science students! Thanks to Mrs. Reissman!

Under the direction of the District Steam committee, Yough hosted it's first ever district egg drop! Congratulations to all the competitors! 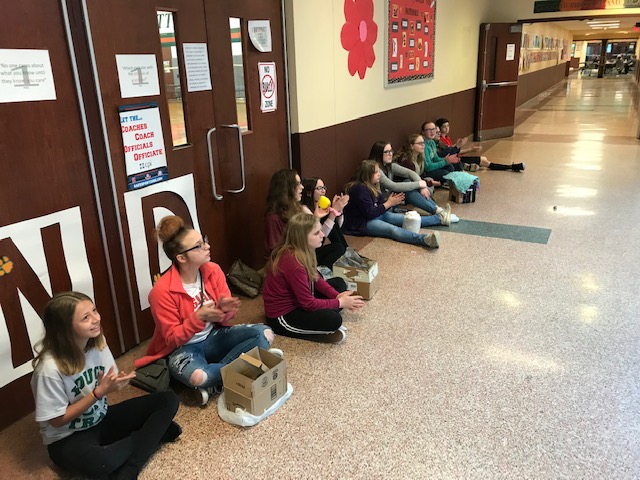 Congratulations to all our YALE students who participated in the pumpkin drop at WVU! 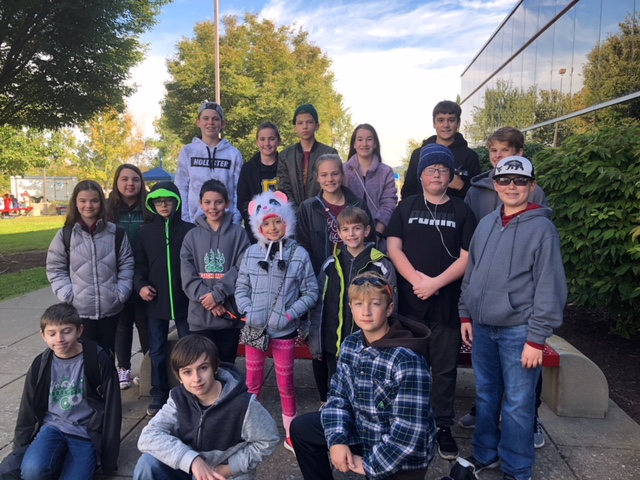 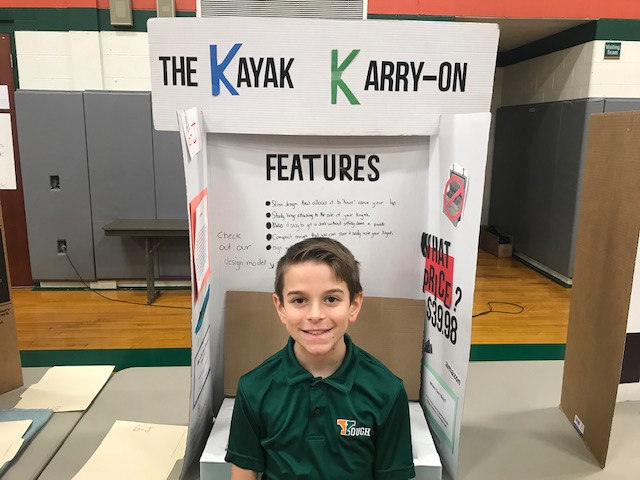 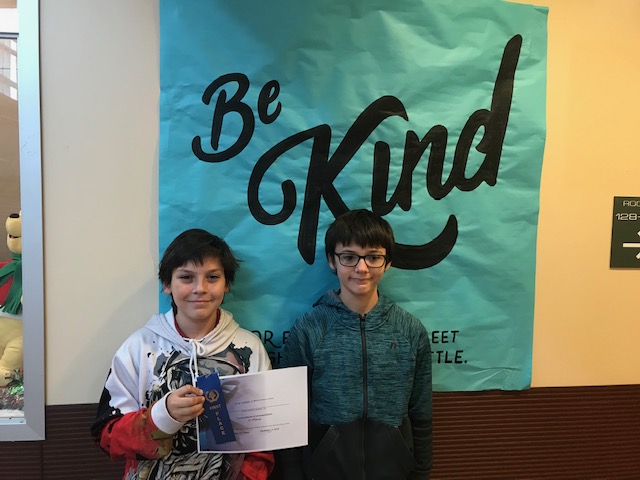